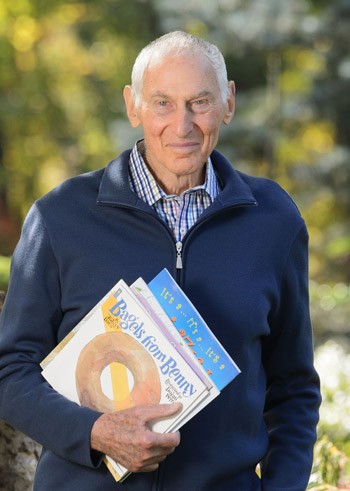 Harold Grinspoon is active, intelligent, quick to crack a joke, and he is only 90 years old. A true renaissance man, he has traveled far and wide, owned and operated a successful business, and has recently begun creating massive art installations, many of which are installed in his and his wife’s, Diane’s sprawling backyard in Western Massachusetts.

He’s also the founder of the Harold Grinspoon Foundation (HGF), an organization that has helped bring numerous Jewish programs to Tidewater and has benefited Jewish communities worldwide. To date, the Foundation has invested more than $200 million in Jewish causes.

Grinspoon’s impact in Tidewater is seen in nearly every local Jewish organization. Thanks to his and the Foundation’s efforts, programs such as PJ Library and LIFE & LEGACY help enrich Jewish life in Tidewater. In addition, One Happy Camper and B’nai Tzedek Teen Philanthropy programs were inspired and modeled after HGF initiatives.

They were joined by hundreds of representatives from 58 different Jewish communities from across North America for three days of learning from experts and reflection about their community’s experience with the LIFE & LEGACY program.

For Kaplan, it was an opportunity to reconnect with a friend and mentor. He says, “Harold made (and continues to make) an incredible impact on my life and career. Fifteen years ago, he gave me the guidance and opportunity that would set me on course for a deeply fulfilling and exciting career path in Jewish philanthropy. It is always an honor and privilege to spend time with Harold.”

Born in 1929 in Newton, Massachusetts, Harold Grinspoon was teased as a young boy for being one of the few Jewish youths in town. The anti-Semitic insults he endured and the subsequent events of World War II and the Holocaust left an indelible mark that would shape his worldview as both an entrepreneur and philanthropist.

In the early 1960s, Grinspoon’s life changed when he purchased a dilapidated two-family home with money borrowed from an in-law. He repaired the house, rented it out for a profit, and launched a career in real estate that has spanned six decades.

In 1978, Grinspoon met Diane Troderman, a former high school teacher who would become his wife and partner in Jewish charitable giving. A battle with tongue cancer in the 1980s had a dramatic impact on Grinspoon and instilled a desire to find meaning beyond profit making. Grinspoon, who credits his Jewish heritage and the values of Judaism as instrumental in his business success, chose to give back—investing his time, money, and energy into strengthening the Jewish community.

The Harold Grinspoon Foundation was established in 1991 with the mission of enhancing Jewish life. The Foundation’s philosophy is infused with Grinspoon’s business acumen: visionary ideas, dynamic partnerships, a focus on return on investment, and a drive to understand and meet the needs of people served. By leveraging philanthropy, the HGF encourages others to invest in Jewish life.

A second foundation, the Harold Grinspoon Charitable Foundation (HGCF) focuses on support for education, farming, energy, and entrepreneurship in the Western Massachusetts region where the HGF and the HGCF are based.

In addition to his work with the Foundations, Grinspoon has served as a founding partner and board member for numerous national and international organizations.

In May 2015, Grinspoon joined Warren Buffett and Bill and Melinda Gates in signing the giving pledge, a commitment to dedicate the majority of his wealth to philanthropy.

The Grinspoons travel extensively around the world. Between them they have several awards and honorary degrees, as well as six children and 11 grandchildren.