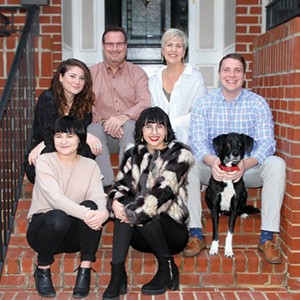 White is the 11th recipient of the four-year scholarship of up to $10,000 per year that is provided to a Jewish student in Tidewater. She plans to attend Kent State University to study Fashion Design.

“I’m incredibly honored to be chosen as this year’s recipient of the Stein Family Scholarship,” says White. “I know Arlene Stein wanted to make the world a better place and I’m so appreciative of the opportunity to carry on that legacy. This is a huge weight off my shoulders. I’m relieved and deeply grateful to all those that helped me along this journey.”

She credits the fashion design courses at NTC as having the greatest impact on her academic achievement. There, she honed the skills to succeed in the fashion industry, learning to sew, sketch, design, market, and merchandise clothes. The courses also connected her with the Family Career and Community Leaders of America. She served as the organization’s president and won first place in their statewide design competition with her fashion lines for two consecutive years.

White, much like the late and beloved Arlene Stein, is committed to bettering the world. Members of Congregation Beth El, White and her family work to support their congregation’s week of hosting Norfolk Emergency Shelter Team, which houses and feeds the homeless in the winter. In addition, she volunteers for other organizations including Blankets for the Homeless through the Jewish Women Renaissance Project, and for Friends of the Israeli Defense Forces. Her sister, Hannah, serves in the IDF and White says she is proud to support her and all IDF soldiers.

White’s commitment to Jewish values is further demonstrated by her professional goals and thoughtful perspective on the fashion industry. She intends to focus on sustainable fashion and ethical marketing with the hope that she can change the way young people view clothing.

“The industry leaves an unacceptably large carbon footprint, produces 1 million tons of waste per year in the United States alone, and is rife with worker and human rights abuses,” she says. “If we could all have fewer, but more meaningful and ethically produced pieces in our closets, we would combat those abuses, use fewer of the earth’s resources, and dump less waste into landfills.”

The Stein Family College Scholarship was established in 2009 in memory of Arlene Stein who did not complete college because of financial hardship. Arlene passed away in 2007 and Jerry Stein, her beloved husband, in 2014. TJF works closely with the Stein family in administering this scholarship.

Click here to read this story on the Jewish News.